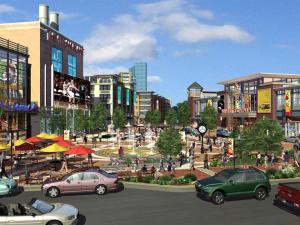 The Lakeland neighborhood was developed beginning in 1892 around the Baltimore and Ohio Railroad, whose Branchville and Calvert Road depots were located approximately one mile to the north and south, respectively. Lakeland was created by Edwin Newman, who improved the original 238 acres located to the west of the railroad. He also built a number of the original homes, a small town hall, and a general store. The area was originally envisioned as a resort-type community around Lake Artemesia. However, due to the flood-prone, low-lying topography, the neighborhood attracted a lower-income population became an area for African-American settlement. Around 1900, the Baltimore Gold Fish Company built five artificial lakes in the area to spawn goldfish and rare species of fish. A one-room school was built in 1903 for the African-American population; a new school was built in 1925.

The Berwyn neighborhood was developed beginning about 1885 adjacent to the Baltimore and Ohio Railroad. It was created by Francis Shannabrook, a Pennsylvanian who purchased a tract of land between Baltimore Avenue and the railroad tracks. Shannabrook established a small depot, built a general store, and erected approximately 15 homes in the area to attract moderate-income families looking to move out of Washington. The neighborhood began to grow after 1900 when the City and Suburban Electric Railway entered the area. By 1925 there were approximately 100 single-family homes; mostly two-story, wood-frame buildings. The community housing continued to develop in the 1930s and 1940s with one story bungalows, capes, and victorians, and later grew to include raised ranches and split level homes.

The Daniels Park neighborhood was developed beginning in 1905 on the east and west sides of the City and Suburban Electric Railway in north College Park. Daniels Park was created by Edward Daniels on 47 acres of land. This small residential subdivision was improved with single-family houses arranged along a grid pattern of streets. The houses range in style from American Foursquares to bungalows, and were built between 1905 and the 1930s.

The Hollywood neighborhood was developed beginning in the early 20th century along the City and Suburban Electric Railway. Edward Daniels, the developer of Daniels Park, planned the Hollywood subdivision as a northern extension of that earlier community. Development in Hollywood was slow until after World War II when Albert Turner acquired large tracts of the northern part of the neighborhood in the late 1940s. Turner was able to develop and market brick and frame three-bedroom bungalows beginning in 1950. By 1952, an elementary school had been built. The Hollywood Park, a 21-acre  facility along the Baltimore and Ohio Railroad line, is operated by the Maryland-National Capital Park and Planning Commission.

Error: Twitter did not respond. Please wait a few minutes and refresh this page.