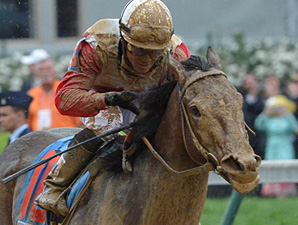 On the first Saturday every May, attention turns to a horse race run in Kentucky.  Although, horse racing has lost much of it’s prominence, the quest for the Triple Crown still resonates with people all across the country. The Kentucky Derby is the first of the “jewels” in the crown (the Preakness Stakes, two weeks following and the Belmont Stakes, three weeks after that are the other two).  Each spring, three year old thoroughbreds are put through their paces and prepare for the big challenge. Various races are run from coast to coast to determine which of the horses will compete. Entry to the Kentucky Derby is limited to 20 horses.

In the past, the horses were selected based on total purse earnings from January 1st to the week before the Derby. This year, they changed the rules. Selection was changed to a points based system that gave more weight to longer races. Horses that primarily were very good at shorter distances (sprints of 6 furlongs, etc) were placed at a disadvantage.  The people in charge felt that since the Kentucky Derby was a one and a quarter mile race, it would be better to have horses that raced at longer distances have a better opportunity to fill out the Derby field.

So, faced with those facts, the experts began their prognostications with the premise that the pace for this years race would be a bit slower than ever before. In the past, horses that were primarily sprinters would race to the front when the gate opened. The pace (the time it takes for horses to reach each quarter mile) would be very quick. If a horse accustomed to running longer distances attempted to “keep up”, they would expend more energy than usual and it would compromise their chance at winning. The “rabbits” (the sprinters) would zip through fast fractions (pace) for the fist half mile or so and then “run out of gas” and the horses that were accustomed to longer distances would take over and usually win.  Any of the horses that were accustomed to longer races that attempted to run with the “rabbits” would usually fail to maintain that pace and they would begin slowing down when the leaders made the final turn and headed for the finish line.

The experts were focused on the potential pace of the race as if the horses had any meaningful impact on how fast they run. I have no doubt the conclusions made would have been accurate if they had just loaded the 20 best sans saddle, jockey and weight and let the horses just take off at the bell and run freely.

That is not how races are run.

All the experts overlooked the fact that there was a jockey sitting astride each horse. This year, 19 horses went to the starting gate. Each with a jockey aboard. Each jockey had been given pre-race instructions from a trainer regarding how the race should be run. Each of the jockeys sat in the saddle, horse poised for action in the starting gate. Each jockey looked down that track and dreamed of winning the Kentucky Derby. They were in control of the horse and their destiny.

The bell rang, the gate opened and the horses began their journey. Through mud and slop each jockey began to guide their steed. It was not a slow pace as predicted.  Over one third of the horse raced for the front of the pack. Seven of them reached the quarter mile point in a blistering 23.5 seconds. As they reached the half mile point, the leader had begun to pull away, but 4 or 5 rivals were bunched close behind and the clock showed a suicidal pace of 45.3 seconds had elapsed. The leader reached the 3/4 mile point in a torrid 1:09.8 seconds and it was apparent the horse was all but finished.  Every single horse that had contended for the lead began that slow motion backward movement that is peculiar to horse racing (they are moving forward, but appear to be either standing still or moving backward in relation to the other horses in the race).

When the horses reached the final turn and began their stretch run, it was the long distance runners that began making their move. Lost in the excitement of “and down the stretch they come!” was the fact that this Derby looked pretty much like every Derby in the past. None of the horses running had any clue about whether they were a sprinter or long distance runner.  They were all responding to the jockey in the stirrups.

The facts regarding which horses could run had little to do with the outcome. The race results were truly dependent on the skill level of the jockey and how each jockey asked his horse to run.  The leaders in the early stages of the race were the last horses to cross the finish line. At the 3/4 mile point, the top three finishers were 17th, 15th and 18th. The leader? Oh, he finished 12th.

All of the experts looked at one fact and immediately thought it was a major factor. They were wrong. Horses are all pretty close in skill level when they reach the Derby. Jockeys are the variable that often determines who will win and who will lose.

So, just remember when the experts proclaim that low interest rates will lead to more sales (not really) and the experts share that low inventory will make it next to impossible to buy a home (pure bunk), those facts are not what will control your success or failure in purchasing a home.

Your agent is just like that jockey. Choose wisely and your run for the roses (purchase of a new home) will end with success.